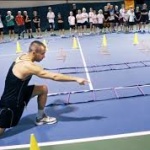 Speed & Explosiveness Exercises! Be The Fastest! Kelvin Marsh has been a Personal Trainer for over 30 years and a Sport Conditioning Coach, working with many different sports, for over 25 years. Having boxed competitively from 1986 – 1992 he learnt a lot about conditioning the body and mind, and all that it entails, at an early age. Namely, that with determination and a positive mindset you can achieve the unexpected. Adversely, despite having immense talent and potential without a determined, focused frame of mind you will never achieve your full potential. These early lessons have been the cornerstone of Kelvin’s coaching philosophies. He has worked at a very high level, achieving great success, in several different countries, but he has never forgotten these fundamentals.

A quick overview of Kelvin’s experience is:

Since being in Sweden Kelvin has not only been working as a Personal Trainer for Nordic Wellness but also:

Football Diploma in Conditioning for Football (English FA), modules taken were:
1. Fitness in football
2. Coaching of children
3. Soccer Camp Coaching Coordinator
4. Planning, preparation and evaluation of coaching sessions
5. Players and match analysis
Kelvin uses this knowledge and experience to motivate his customers to achieve – and surpass – their goals by instilling confidence and empowering them to overcoming any potential obstacles.
In the area of ​​Fitness Professionals, there are not many who can claim to be both more qualified and more experienced than Kelvin Marsh.